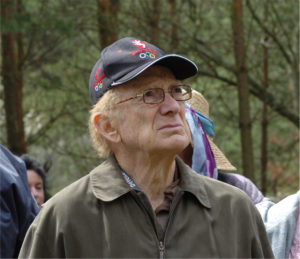 I was a young infantry soldier in the 89th „Rolling W“ Infantry division. Our division came to Europe in January 1945. Our first experience in combat came in March 1945, when we crossed the Sauer, Moselle and Rhine rivers.
April 1945, we stood at the border of Thuringia and the first town we took was Eisenach. But nothing prepared us for the encounter of the Ohrdruf concentration camp, which we liberated on April 4th. 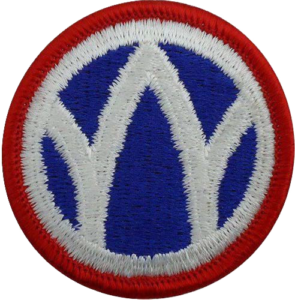 In mid-April, we pushed forward towards the Saale River. There our division discovered an underground aircraft factory, which had been built by more then 12.000 forced labourers. When crossing the Saale River we discovered a camp hidden at the end of a valley where sick and dying people had been left behind. While we liberated those camps, I celebrated my twenty-first birthday, April 13th, 1945.

We continued to move further eastwards and captured Zwickau on April 17. So came an end to the war in Europe.
Since then, memories sometimes fade, but I revisited Kahla, where I had the pleasure of meeting former forced labourers and a young generation eager to learn what I had experienced as a young soldier.
In 2020 I had made plans to come to Europe again and to visit Kahla once again. Unfortunately the pandemic made any travel impossible. This year the situation hasn’t changed.

Today, I’m 97 years old and I’m ready to come to Kahla when possible.

We had a mission to fulfill 76 years ago, and the Liberation of Europe and the ending of dictators and ending prejudice against other people and races was that mission.

I send greetings to the people in Kahla and Europe and hope that this year, or at latest next year, we will be able to meet again in person.